At our house, the beginning of May means spring is here with tulips blooming, soccer season starting, snow falling, and preparing for birthday parties.  Actually, that describes last week perfectly, snow and all!!

With both kids celebrating birthdays in a few weeks, it was time to get started on the invitations.  But before that could be done, they both had to decide what kind of party they wanted.  Casey couldn’t decide between a hockey, soccer, LEGO, or ninja party and Robyn only wanted a Tinkerbell Pirate Fairy party… again!

Casey finally settled on a hockey party which was what I suspected he would pick since he’s really obsessed with hockey right now.  The Edmonton Oilers are his favourite team, of course, so I designed him an Oilers inspired birthday invitation.

Instead of simply using the logo on the invite, the team colours and round shape of the logo were used as the basis for the card. 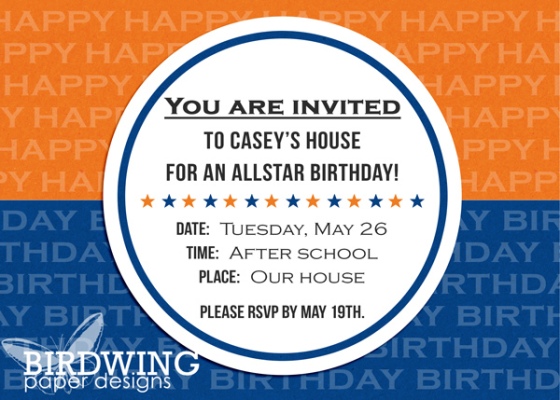 As for Robyn, she wanted a fairy on her invitation and there was no way I could try to draw that.  I know the limits of my talents and that was not happening!

Instead, we waited for a nice day outside, she put on her Tinkerbell costume and we took a photo in the garden to be used for her invitation.

Now we just need to decided on the guest list and email them out.  One task crossed off the birthday party checklist, only fifty more to go!!

Welcome to my card making space filled with ideas, inspiration, and pretty things. From Edmonton, Alberta.

Independent Stampin' Up! Demonstrator since 2018

For more information about products used or to order cards, please send an email.